‘The Weight of Water’ by Sarah Crossan 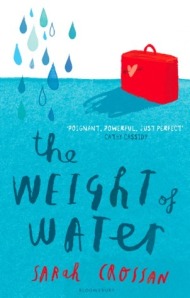 The Weight of Water, by Sarah Crossan

Synopsis: The Weight of Water opens with 12 year old Kasienka and her mother leaving their homeland, Poland, and travelling to England. They are searching for Tata, Kasienka’s father, who headed to the UK three years previously. Kasienka and her mother arrive in Coventry, equipped only with a suitcase, a laundry bag and a scanty knowledge of the English language. They make a home in a grotty single room in a high tower block overlooking the Coventry Ring Road.

Kasienka’s mother is driven by a furious determination to find her husband. Meanwhile Kasienka fights a daily battle of survival at the local school. She is tormented by the class bullies and ignored by ‘The Pity Club’. However Kasienka displays remarkable courage and strength of character as she resists the persecution and stays true to herself. Her one escape from this daily grind is swimming. Kasienka is a talented and passionate swimmer and it is through swimming that she meets William, her first English friend and later on her first boyfriend.

The search for Tata is finally concluded but it is not the happy ending that Kasienka and her mother had hoped for.

My Review: When I opened the first page of The Weight of Water, I could see already that it would be an original story. The very layout of the text is unusual; the writing is presented more in the form of poetry rather than prose.

Despite the unusual format however, I read the text in my head as though it were prose. I think the poetic layout of the text would have more impact if the book was read out loud. (This made me think that The Weight of Water would be an interesting text to use as a class-reader at school.)

As well as the poetry-style layout of the text, the story is also written in very short chapters. This added to the poignancy of the writing – I wanted to savour each chapter as though each one were a piece of writing that could stand on its own.

The book is written in the first person, from Kasienka’s point of view. The author accurately portrays Kasienka’s world being turned upside down – the loneliness of arriving in England as a young Polish refugee; the trauma of battling against the cruelty of adolescent girls; the heart-turning summersaults of first love. And yet all these emotions are described in an under-spoken and simple manner. Perhaps that is what makes the text so convincing and real.

There are a host of contrasting characters. Kasienka’s mother is perhaps the most interesting but also the saddest of them all. Her determination to find Tata is obsessive and distracts her from tending to Kasienka’s needs. And when Kasienka’s mother discovers the harsh truth of Tata’s whereabouts, she does not know how to handle her grief.

Kanoro was my favourite character. Kanoro is a Kenyan doctor who lives in the next door room to Kasienka and her mother. Kanoro provides a much needed ray of light, love, wisdom and friendship to the Polish immigrants.

I read this book having just read an action-packed thriller. This book does not compete on the action front. Indeed, the story line is fairly quiet when it comes to action. However, I found myself engaging with the themes and characters more so than I did with the action-packed thriller book. I could also have a more interesting and thought-provoking discussion about this book.

There is much that makes The Weight of Water a memorable book: the believable characters; the urban, hard setting of inner-city Coventry; and the gritty theme of refugees, broken-families, bullying and adolescence.

I am a big fan of children's literature - both reading children's books and also writing my own stories for children. I am currently working on my first children's book, The Springs of Inyani. I am a qualified primary school teacher and have taught at primary schools in London and Hampshire. I am the creator of Creative Beans - creative writing workshops for children. Running these workshops gives me much enjoyment and I always look forward to reading the fantastic stories written by young authors. (www.creativebeans.org) Over the last few years, I have jotted down my thoughts and a short summary of any children's books I read. Given that children and parents often ask me for book recommendations, it made sense to put my thoughts and summaries online. All the reviews listed are my own personal opinion. This is purely subjective so please read with as many pinches of salt as you think necessary.
View all posts by Wright Reading »
← ‘Words in the Dust’ by Trent Reedy
‘The Little White Horse’ by Elizabeth Goudge →