‘The Demon’s Watch’ by Conrad Mason 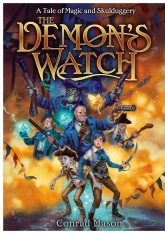 The Demon’s Watch, by Conrad Mason

Synopsis: On the island of Fayt, humans live peacefully alongside trolls, goblins and other magical creatures. However, their harmony is under threat from the League of the Light who are determined to wipe out all non-human creatures. Fayt’s survival lies in the hands of The Demon’s Watch led by Captain Newton and also an unlikely half-goblin orphan boy, Joseph Grubb.

My review: I picked this book up after hearing it was the first novel written by a friend of a friend of mine. A distant connection but enough to make me interested and after the first chapter I was gripped.

Joseph Grubb, the half-goblin orphan boy, is the first of many interesting characters to be introduced. The opening chapter shows him scrubbing dishes in his uncle’s tavern, surrounded by a colourful crowd of dwarves, pirates and drunken sailors. I was immediately enchanted by this intriguing, magical setting. In the second chapter, the reader is taken deeper into Mason’s magical world and introduced to a very different character, Captain Newton, head of the Demon’s Watch. He is onto the scent of some underhand smuggling but what seems like a routine investigation turns out to be the potential downfall of Fayt.

As the story continues the cast of colourful characters continues to grow, with each chapter written from a different point of view. In total there are about six or seven different viewpoints which gives the story a fast, snappy pace. I most enjoyed Slik, the bumptious and deceitful fairy belonging to Captain Newton and also Tabitha, the determined, youngest member of The Demon’s Watch.

The pacey plot is filled with action that will entertain even reluctant readers. The plot is not predictable though and I enjoyed the unexpected twists that kept me guessing until the end. Even the last few pages threw in yet another cliff-hanger which have left me full of anticipation for Mason’s sequel to be published.

For young readers hungry for adventure and a touch of magic, The Demon’s Watch will give hours of enjoyment. Definitely worth reading!

I am a big fan of children's literature - both reading children's books and also writing my own stories for children. I am currently working on my first children's book, The Springs of Inyani. I am a qualified primary school teacher and have taught at primary schools in London and Hampshire. I am the creator of Creative Beans - creative writing workshops for children. Running these workshops gives me much enjoyment and I always look forward to reading the fantastic stories written by young authors. (www.creativebeans.org) Over the last few years, I have jotted down my thoughts and a short summary of any children's books I read. Given that children and parents often ask me for book recommendations, it made sense to put my thoughts and summaries online. All the reviews listed are my own personal opinion. This is purely subjective so please read with as many pinches of salt as you think necessary.
View all posts by Wright Reading »
← ‘Forest of the Pygmies’ by Isabelle Allende